﻿Figure Drawings and Paintings on Exhibit at the Roost Gallery in New Paltz: November 14th through December 7th

There’s a touching set of documentaries about a community of carpet weavers in the Isfahan and Arak regions of Iran 1. These weavers sit side by side at a large loom. They work together on the same carpet, and sing out the patterns of the carpet in folk songs that are said to be “the results of thousands of years of weaving culture”. In one of the documentaries the speed and dexterity of the weavers bring to mind the kind of movements that bees make when they’re collecting pollen. This is a community that values its own past, yet transforms it to meet the needs of the present moment.

For years I’ve looked to this kind of craft tradition as a model for my own work. More recently, I’ve thought about the collaborative aspect of this tradition as a guide for setting up a drawing and painting school.

A number of works in this exhibit may seem to be based merely on a desire to imitate the look of the European Renaissance art of the 1500s. While I do have an interest in the appearance of the drawings and paintings produced during this period, I’m more interested in the mindset that seemed to permeate the Renaissance (and pre-Renaissance) workshops. This mindset, like the attitudes of the carpet weavers, included a respect for the work of the craftspeople that came before them, an interest in perfecting the craft in ones own work, and a desire to work with others. 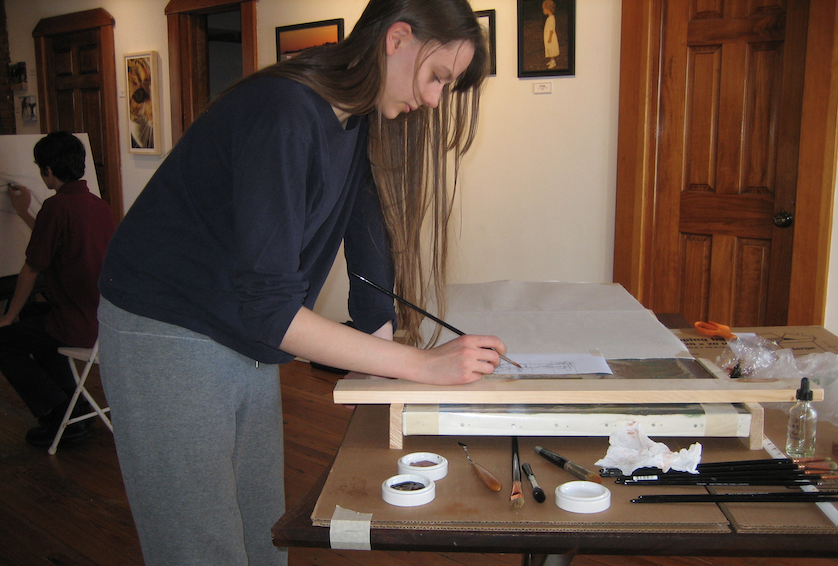 Chloe H, working on the leftmost figure of the “Survey” painting. As a way to look more carefully at the shapes of this leftmost figure it was painted with the painting upside down. Owen B is in the background, doing a drawing study. 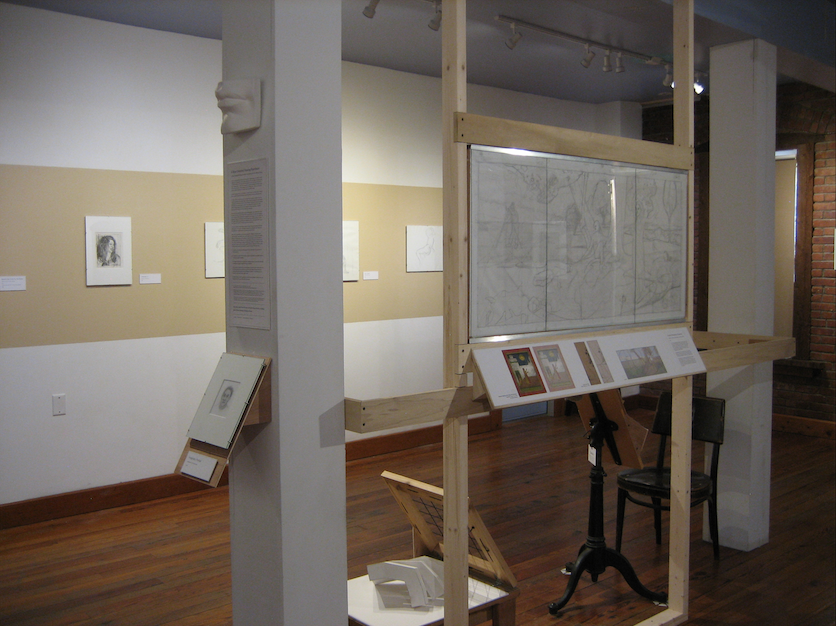 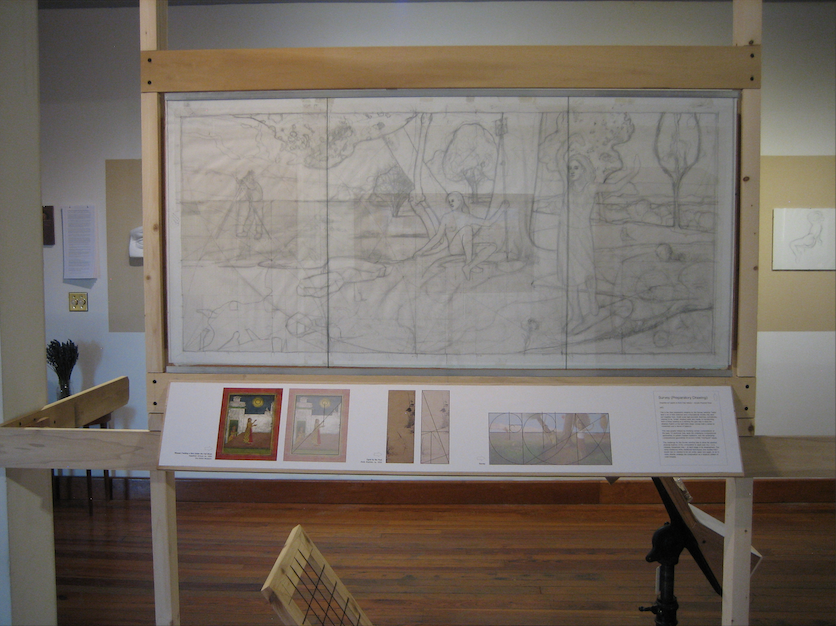 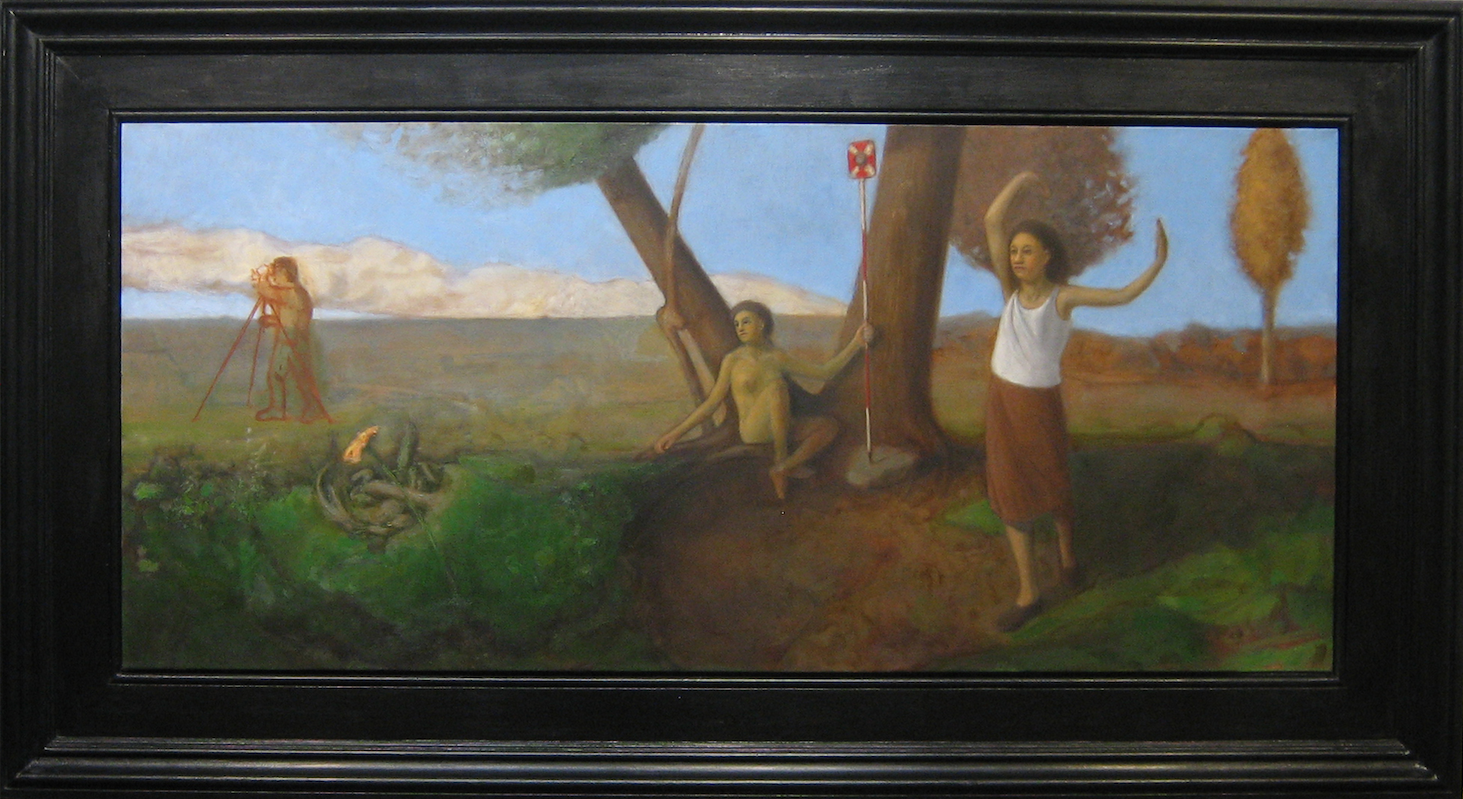 In her book titled Classical Drawing Atelier, Juliette Aristedes says that “once a student knows how to draw, lack of skill will not hinder the development of a personal vision. We can learn from the past not by blindly adopting historical methodology but by interpreting it and adapting it to our own needs.” This quote sets the stage for the work that has gone into this year’s figure drawing workshops. The word “skill” implies a practice that grows slowly (and collectively) over time, and the statement that “we can learn from the past” provides an invitation to connect with a shared history.

The only other question was how to take the historical records of the working processes of the Iranian carpet weavers — or, in my case, of the European craft guilds of the Renaissance and Middle Ages — and interpret them in a way that felt like it could address a present-day need.

While noticing a general difference in the mindsets between the craftsperson of the past and the contemporary artist, I also noticed in myself a need for what I’d describe as a more grounded drawing experience. I felt that this need could be addressed by using the process of drawing as a means for cultivating an attention on the present moment. This same attention could also follow/inform the way that a series of moment-by-moment drawing movements could be related to one another within a given span of time. The wish to work with others who shared this particular interest led to the idea of setting up a figure drawing workshop that would have as its basis the following three specific goals.

1.) To carefully make moment-by-moment observations of the human figure in the physical world of three dimensions.

2.) To actively open oneself to the visual rhythms, gestures, forms, proportions and patterns that call to us when making these observations.

3.) To intentionally translate those visual callings into a “drawing-performance”, an on-the-spot choreography where lines and shapes are arranged into a specific composition 2.

I strongly believe that these three efforts practiced together over time can give the aspiring artist a way to more fully engage with the visual world, and can also result in drawings that more reliably and precisely communicate the artist’s specific experiences and intentions 3. These two things, for me, represent the most valuable goals of artistic drawing.

1. This is a set of three very short documentaries made by Mehdi Aminian. SOURCE: https://www.oeaw.ac.at/vlach/projects/phd-projects/persian-carpet-the-woven-sounds/

2. If these three goals sound familiar it may be that they’re simply describing what we all set out to do when drawing from life. The challenge, at least for me, is that even though I set out to follow these goals, in the middle of a drawing I often end up daydreaming about any number of different things, such as what I’m going to eat for lunch later in the day. I think that some of this kind of daydreaming is natural, but a part of me wants to have these goals written down and close to me as I draw.

3. This is conceived of as a purely physical (non-verbal) form of communication. Anyone who was able to undergo the physicality of the drawings — and, for a brief moment, to let the historical, social, theoretical and philosophical considerations fall away — would be able to recreate the feelings that the craftsperson experienced during the drawing process.